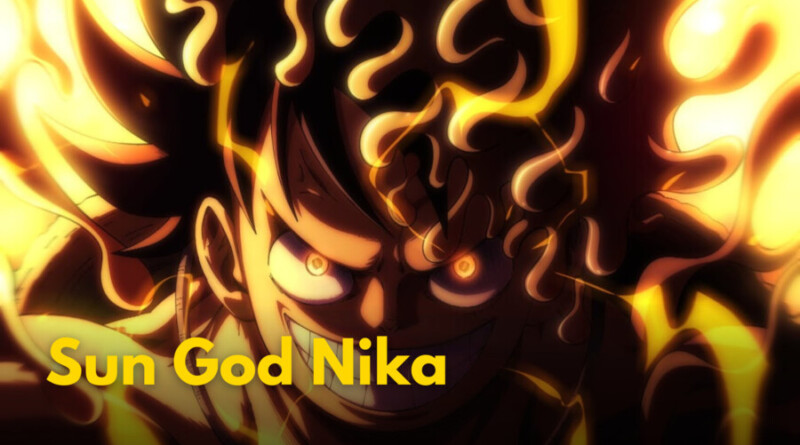 Hello fellas, I’m Sandesh, a writer, copywriter, and digital marketer. I like to write much soo that, You love! On that note – Stay Joyful.

Sun god Nika is a God who makes people smile wherever he goes. We learned in chapter 1044 that Luffy’s fruit name is not “Gomu Gomu no Mi”, instead, it was “Hito Hito No Mi”—Model Nika. It is the most ridiculous power in the world and the most useless one. Only limited by its imagination. Whereas we all know how Luffy is, his imagination is like a wind of air no one can predict it (not even Kaido).

Luffy awakens his devil fruit, unlocks Gear 5th form (a peak, he says), and becomes the Sun God Nika. One of four gods in One Piece. Nika, the Sun God, is one of the four gods referenced in the Skypiea storyline for the first time. We watched individuals being sacrificed during the Noland flashback to prevent the deaths that were occurring in the village.

Nika was a legendary warrior who was formerly worshipped as the Sun God by enslaved people in antiquity. Who’s-Who was the first to mention him after hearing about the legend from a jail security guard imprisoned by the World Government.

The Hito Hito no Mi, Model: Nika is a Mythical Zoan-type Devil Fruit that allows the eater to inherit Nika’s attributes and skills. The World Government is particularly interested in this fruit because of its ability and fearful awakening, which Luffy did against Kaido.

The world government changed the “Hito Hito no Mi” name into “Gomu Gomu no Mi” just to prevent others from knowing it. Even to the point that not even the Four Emperors and their various crews appear to be aware of it.

Nika’s true identity is still unknown, however, silhouetted photos have been displayed. He has long, slender limbs, comparable to Luffy’s, fiery hair, and a big smile.

It’s unclear why he was linked to the Sun in particular, but sun gods in the real world frequently signify strength and wealth, so the same may be said in One PiecePiece. Because the Sun is also the key to life or may be perceived as bright light, it seems natural to recognize it as a “fighter of emancipation.”

He may have been a Lunarian, for example. If that’s the case, Nika’s flame-like hair will make sense, as King’s people could manipulate fire.

Who is Nika in real life?

Nika would be the Greek Goddess of Victory “NIKA“, or Brazilian Sun God Meri, and Surya, a Hindu god, both the ‘Sun’ and the Sun god.

Will, there is no confirmation from Oda on who the character Nika is based on. Still, joyfully many other gods in real life significantly reference “Nika” from one Piece.

There are my top 3 guesses on who the characters are based on. First, let’s know something about these gods.

In the iconography of classical times, Nike is often portrayed as a beautiful young woman with wings, holding a palm branch, wreath, or Hermes’ staff, all of which have symbolic importance. This is due to her role as Victory’s messenger. Her massive wings, on the other hand, are her most striking feature.

In contrast to depictions of earlier gods who had wings that might take on the form of birds in tales, in the time of the classical period, Nike is the only one to have preserved her wings.

They were probably necessary because she’s frequently depicted as a flying warrior with wings, rejoicing triumph, glory, and fame with laurel wreaths. In addition to the wings she carries, one of her greatest strengths includes her fast running and her ability as the most divine Charioteer.

With her stunning appearance and her unique abilities, Nike does not make an appearance in many mythological stories. Her role is usually as a friend and assistant in the story of Zeus and Athena.

Much like “Nika” (Greek Goddes of Victor), Luffy also has a similar trade. Like in gear 5th, when Luffy ran in the air using a flame cloud, just like “Nika” used flying wings frequently.

Hear me out, Oda himself said. If you Luffy would live in actual life, it would be in Brazil. There is not much info on ‘Brazilian Sun God Meri’ except…

Meri is a folk hero and sun-god in the Bororó people of Brazil’s mythology. Hyperion, Saturn’s moon, has a crater named after him.

This would be our most vital point on Gear 5th Luffy and how he unlocked it.

Surya—Hindu god, both the ‘Sun’ and the Sun god

Surya is both the Sun and the Sun deity in Hinduism. Although various other deities acquired solar traits throughout the Vedic period (1500–5th century BCE), most of these were combined into a single god in later Hinduism. Surya was previously revered with Vishnu, Shiva, Shakti, and Ganesha, and several temples are devoted to him across India.

A group of Brahmans (priests) known as the Smartas worships those five deities, but only the Saura sect worships Surya as the ultimate deity. Most Hindus, on the other hand, invoke him, and the Gayatri mantra, which many Hindus recite daily at dawn, is directed to the Sun.

Surya deva is also a deity just like the Sun-god Nika, with many similar abilities to perform like he’s dancing with freedom.

How did Luffy achieve Gear 5th?

After Kaido smashes Luffy in the face, and Luffy gets unconscious, Luffy’s heartbeat beats like a musical rhythm in this condition, which Zunesha refers to as the “Drums of Liberation”.

The quantity of Haki produced by this form was powerful enough to be felt on the Skull Dome’s Live Floor, taking out several Beasts Pirates in the process.

The promise that Joy Boy made

This connection is vital to Gear 5th Luffy because Joy Boy promised the people in Fish-Man Island 900 years ago that we would return someday.

His Poneglyphs were created in the Kozuki Family Kozuki family about 800 years ago, so his apology letter was written about a century later.