The series takes place in Academy City, which is a city filled with students – 80% of the 2.3 million population. The city’s full name is Academy City of Science and Technology, referring to the link between their educational system, which consists of many schools and institutions and scientists who research psychic powers and higher technology. Academy City is approximately 30 years ahead of the rest of the world.

He is the strongest among Level 5 Espers. To understand who can be classified as an esper, I am going to use a simple definition – an esper is a person who emits AIM. AIM (An Involuntary Movement) refers to the phenomena where an esper involuntarily emits an invisible energy field from their body, which is called an AIM Diffusion Field.

Espers are ranked according to the System Scan. The System Scan is a regular city-wide testing event that determines the true power level of the espers and is a part of the Power Curriculum Program (a program where espers enroll to acquire powers thanks to drug usage and experiments).

To understand how the ranking works, the Level 0 esper is barely able to pass the curriculum’s grading exams. There are currently 6 levels (Level 0, 1, 2, 3, 4, 5) meaning that level 5 is reserved only for Academy City’s best of best. Academy City has 7 Level 5s, who are further ranked from the weakest (the 7th on the list) to the most powerful esper, the 1st on the list of Level 5s, Accelerator.

Considering the facts above, Level 5 espers are amazingly powerful compared to other espers.

To understand Accelerator and why he proceeded with an insane and cruel Sisters experiment, I am going to explain his past first.

Accelerator was born with talent, meaning that he did not need to do much compared to the third strongest Level 5, Misaka Mikoto, for example. Apart from that, he is highly intelligent, which is also mainly a genetic thing. One would say that Accelerator is lucky – wielding the most powerful esper ability, being intelligent, not having to train endlessly… what could go wrong, right?

Accelerator, being the most powerful among Level 5s, has always been a target of other people, who used to want to fight him, because again, he is the strongest. If they beat the strongest, that can claim that place for themselves.

It’s then when he realizes that one day, this power of his, is going to turn the whole world against him. He realizes it can destroy absolutely everything. Here, we also see that Accelerator, despite wanting to have a normal life and friends is unable to do so. It’s not that Accelerator is some emotionless monster.

Accelerator’s experiences with people can be categorized as the following:

After countless of events with this character had happened, Accelerator agreed to participate in the experiment called Sisters. This experiment involved Accelerator killing 20 000 clones of Misaka Mikoto, a Level 5 Esper, ranked the third among Level 5s. After Accelerator kills 20 000 of these clones, he should have (according to Tree Diagram) achieved a Level 6 shift. I will explain more about that later.

In anime, we also learn that Accelerator used to have a normal, human name before. But his past remains a huge mystery – Accelerator himself seems to be the one also suppressing unconsciously his past to protect himself from hurtful emotions.

If you want a TLDR – Accelerator past can be described as tragedic and traumatic.

Accelerator’s ability is based on Vector Transformation. This ability allows him to control vectors (magnitude and also direction) and influence objects that have vectors, such as bullets, heat or electricity. This ability requires both high intelligence and a great amount of accurate calculative power – he needs to consider multiple vectors and variables while using his power.

He is called also The One Who Wields the Power of God, most likely referring to his ability to control nearly everything in the world.

His passive ability, Reflection, can reverse any incoming vector coming towards his AIM Diffusion Field. He has been using this ability since childhood and it can be done by simple calculations that are carried subconsciously. Accelerator subconsciously establishes a filter that analyzes everything as harmful or not and uses this ability to reflect anything that could harm him, like high-velocity vectors.

Despite losing his processing ability in episode 20 of Toaru Majutsu no Index, Accelerator eventually reaches Awakening, developing angelic characteristics and traits, boosting his powers even further.

To understand the powers, I am going to sort them out like this:

Accelerator is still Level 5, although he opened the door to the magic side. His power is growing through the magic side and not the science side.

If we want to compare him to all beings in the Toaru Universe (low, mid, high, top and god tiers), he is most likely a high tier in his Awakened state. In his normal state, he is upper mid-tier.

Despite being this strong, he has multiple weaknesses.

If he is attacked upon law or vector that is unknown to him, like Kakine’s (the second strongest Level 5) Dark Matter, his defense can get penetrated. 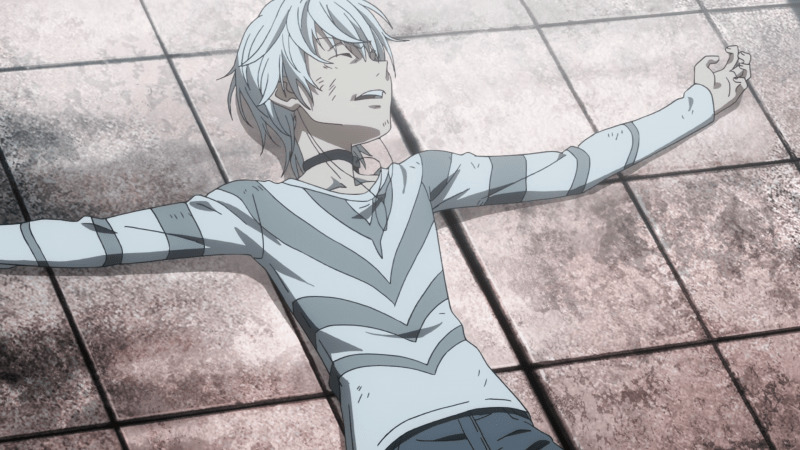 Reflection has one more flaw – since it reverses only the vectors that are coming towards him, any vector that comes towards his barrier and pulls away at the exact moment before hitting its field will go towards Accelerator.

There is one ability that can also bypass his almost perfect barrier, and that is Imagine Breaker. This ability allows its user, Touma Kamijo, to negate anything supernatural, ranging from magic to supernatural esper abilities.

In episode 20 of Toaru Majutsu no Index, Accelerator gets shot to his head while trying to remove the virus from Last Order. It is only because he sacrificed himself to remove the virus from her that he got shot and lost his processing ability. Now, he has the processing done externally thanks to Misaka Network. The choker can be turned on and off to use the calculations but lasts only around 30 minutes before the battery runs out of power.

The last weakness I have on my mind is Last Order. He is willing to risk his own life to protect her.

Nevertheless, it’s important to say that Accelerator is still the strongest esper in Academy City even after this “nerf”.

Accelerator continues to participate in the Sisters experiment I mentioned before only because he wants to fulfill his wish to be left alone. I assume that his biggest dream was to lead a peaceful life from the beginning, but he was never allowed to do that. Deep inside he wanted to make friends and did not really want to kill people.

Around age 6, he agrees to join the Sister experiment proposed by scientists and hopes that if he goes beyond the strongest if he acquires the absolute power and is ranked as Level 6, no one will even think about challenging him. To do so, he needs to turn off his humanity or at least block unconsciously the feelings related to murdering clones.

To do so, Accelerator unconsciously stops thinking of them as humans, and he refers and thinks of them as objects, or things, that are produced by a push of a button. This helps him to carry on these experiments.

Even though he kills clones without mercy, we can still see that he tries to communicate with them before each experiment, only to be met with no understanding, because the clones have blocked emotions.

In his fight with “the weakest” protagonist of the Toaru Majutsu no Index, Touma Kamijo, he receives multiple blows by Touma’s right hand that wields the Imagine Breaker ability, causing to penetrate Accelerator’s Reflection and hurt him. Accelerator is defeated here for the first time in his life, and the experiments end because they were all based on the calculations that he is the strongest and undefeatable esper, which was proven wrong by the encounter with Touma. This is where Accelerator starts realizing what he has done, even though we can’t see it yet in the anime.

Accelerator’s life and personality further changes thanks to his meeting with Last Order,  the command center of the Misaka clones and administrator of Misaka Network. She shows no signs of hatred against him even though he knows he has killed more than half of the clones, stating that she still thinks he did not want to participate in the Sister experiment.

When Last Order is infected with a virus that has to be removed, Accelerator decides to save her instead of killing her and gets shot to his head because of insufficient calculation left for his Reflection ability. Since then, Accelerator is using Misaka Network (the shared network of the remaining clones of Misaka Mikoto) for his processing abilities.

Last Order looks like a 10-year-old younger version of Misaka Mikoto and acts like a real human, showing all sorts of emotions, unlike the other Misaka Mikoto’s clones. Accelerator gets emotionally attached to her and decides to protect her no matter what.

As the anime progresses, we see a huge shift in Accelerator’s famous villainy. He does not seem to kill people who try to fight him if it’s not necessary and just knocks them out instead.

He eventually starts questioning who he really is. Is he evil? Is he good? Along with that, he knows that what he did was extremely horrible and he realizes the full extent of his actions. He also has PTSD, often having flashbacks of dead Misaka Mikoto’s clones, murdered by him. They are not objects anymore, he now acknowledges them as individual human beings.

Accelerator concludes that he is just himself and reaches a new Awakened state, where his black wings change to white wings, and hence, he becomes even more powerful.

He not only becomes a good person, but he also finds a purpose in his life – to protect Last Order.

It does not bother me at all that he fights both women and men with the same brutality. Even if they are cute.