Just when I thought that I had seen everything in isekai, Reincarnated as a Sword proved me wrong. It introduced a boy who was reincarnated as a sword in an RPG-like world. After a fateful encounter with a 12-year-old Fran, he joins her on the journey of reclaiming the pride and honor of her kin, the Black Cats tribe. It comes as no wonder that fans of unusual isekai shows felt an instant attraction towards this anime and are looking for more anime series like Reincarnated as a Sword.

As I mentioned, this show is fairly unique as it introduces a protagonist who isn’t reincarnated as a typical OP hero tasked with saving the new fantasy world. It also lacks the harem aspect, which is refreshing to see nowadays.

With that in mind, let’s take a look at 10 anime like Reincarnated as a Sword.

Fans of Reincarnated as a Sword will appreciate the RPG-like system of Solo Leveling. Although it’s not an isekai, it’s still a ride you can’t get off.

One day, he is abandoned by his team and left to perish at the hands of some of the most horrifying monsters he has ever encountered as he enters a secret double dungeon. However, right before the final, fatal strike… Ping! [Congratulations on becoming a Player.]”

Arifutera is another isekai, RPG-based anime like Reincarnated as a Sword.

The plot centers on Hajime Nagumo, a typical Otaku boy, and his adventures in a parallel world.

8. The Fruit of Evolution: Before I Knew It, My Life Had It Made!

The Fruit of Evolution: Before I Knew It, My Life Had It Made! is an isekai anime that’s most similar to anime like Arifureta and Reincarnated as a Sword.

High schooler Seiichi Hiiragi is bullied by his peers for being overweight and a “failure.”

One day, his entire school is all of a sudden taken to a world of swords and sorcery that resembles a video game. There, he unintentionally consumes “the Fruit of Evolution,” which changes everything.

7. The Rising of the Shield Hero

The Rising of the Shield Hero is a 2019 isekai anime that’s most known for the famous betrayal that happened to the MC.

The story starts with the MC transported to another world as a Shield Hero, which is considered the weakest of all Heroes. The heroes are tasked with protecting this new world. But instead of receiving any kind of support, he gets backstabbed by the only companion that agreed to follow him.

With no one to turn to, he sets out on a solo journey to become stronger.

Soul Eater might not be an isekai but there are human hybrids who can transform into powerful weapons, and they work together with Meisters, the people who can wield them.

While the goals are different in each anime, those who enjoyed the dynamics between Fran and Shishou will probably like this anime as well.

While there is no reincarnation involved, Absolute Duo shares Reincarnated as a Sword’s “human transformed into a weapon” element. On top of it, the students work in pairs.

The students of Kouryou Academy High School are special: they can transform their souls into a weapon. Each student is required to work in pairs in the hopes that one day they would be able to achieve Absolute Duo power.

The most played video game in history is set to be shut down in the year 2126. Momonga, a player, logs in for the final time to reflect on the heyday of his once-famous guild. When the time strikes 0:00, Momonga discovers that he has been taken to a completely different world as opposed to being kicked out of the game. Furthermore, all the NPCs appear to have developed consciousness, giving the impression that he is no longer in a gaming world. With this information in hand, he makes the decision to explore this New World.

In a similar vein as Reincarnated as a Sword, Overlord is an isekai anime series that has a nonhuman MC. Fans of this trope are sure to enjoy the great world-building and complex plot of this series.

So I’m a Spider, So What? is my absolute favorite isekai with a strong female protagonist. And by that,c I mean mainly mentally, at least at the start of the anime. She receives great character growth, so if you care about that you’ll enjoy it for sure.

Following a mysterious occurrence, a whole class is suddenly reincarnated in a fantasy world resembling an RPG game. A girl who is the main character discovers she has been reincarnated as a spider. Will she be able to endure and learn what truly happened?

Kuma Kuma Kuma Bear might have a weird name and even weirder costumes but it’s still a cute, lighthearted, and enjoyable show to watch.

It tells the story of a strong female adventurer isekaied to a game-like world. But she doesn’t wield a sword. Instead, her skills are teddy bear-themed!

The MC of Slime dies and reincarnates as a SLIME in an RPG-like fantasy world with monsters and magic.

He slowly but surely becomes OP thanks to his intellect and unique Predator ability, which can steal abilities from others. Sounds familiar? 😉 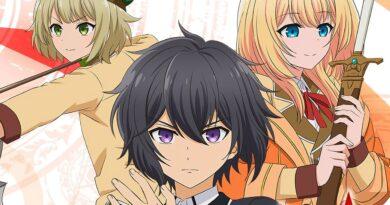 One thought on “10 Anime Like Reincarnated as a Sword”